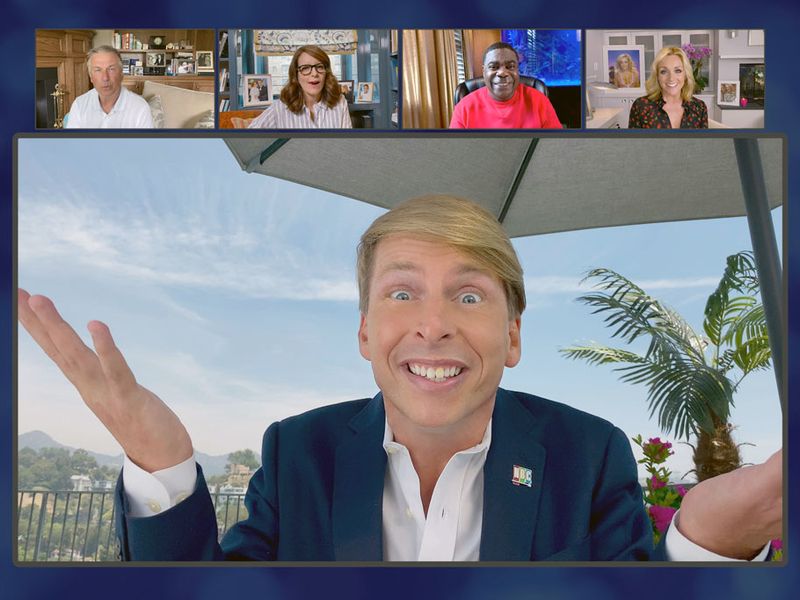 Some NBC affiliate groups refused to air the episode because they were concerned it would heavily promote the company’s new Peacock streaming service, which they see as a potential threat to live TV viewing.

The special episode certainly put the streaming platform in the spotlight, with the story line centered on remaking the fictional “TGS” show for Peacock and having to sell a full year of ads in one meeting.

The idea to bring the upfront to the masses in the form of a “30 Rock” reunion came together on March 11, shortly before NBCU put out a press release announcing its usual show at Radio City Music Hall wouldn’t take place due to COVID-19. Yaccarino says given the adversity and uncertainty in the world, the team thought it was the right time to reinvent the upfront. “It was time to reinvent this archaic process, this rite of passage every May.”

Yaccarino says the premise for the episode was “based in this direct-to-consumer era where we can bring the upfront to viewers and marketers simultaneously.”

While Yaccarino wouldn’t go so far as to say she won’t be back on stage at Radio City Music Hall next year, she says consumers deserve to see its content. “Our entire business is built around people and consumers, they tell us where to go and we will continue to listen to them.”

NBCU used the episode to highlight non-traditional ad formats. Instead of typical ad breaks, NBCU ran promos for its own brands, with sizzle reels of its networks and shows. Similar to the conventional NBC upfront in recent years, where the program is broken down by genres of content, each commercial break highlighted a different part of the company.

And of course, there was plenty of promotion of Peacock, which officially debuted to the masses earlier this week.

Within the first two minutes of the episode, Alec Baldwin’s character Jack Donaghy touts “NBC’s amazing new streaming platform” that houses all of NBC’s hit comedies. When Tina Fey’s character Liz Lemon starts to say, “even ‘Friends,'” he slaps her through the phone. Of course, the joke is in reference to the fact that “Friends,” while it originally aired on NBC is owned by Warner Bros. and airs on WarnerMedia’s service HBO Max.

Aside from many of the original cast members, the episode also features cameos from other NBCU stars, including Mandy Moore of “This Is Us,” Andy Cohen and Khloe Kardashian.

In a video during the Creativity Summit, Tina Fey, star and creator of the sitcom, said it made sense to bring back the series for the special, because “the world of ’30 Rock’ always blended commerce and content.”

During its run, “30 Rock” was known for its product placements, with Fey’s character Liz Lemon regularly breaking the third-wall to speak directly to viewers to pitch a brand.

“We have a level of understanding of marketing and advertising language that matches the level of medical knowledge people have on doctor shows,” Fey said.

Earlier in the day, NBCU unveiled 11 new ad formats designed to hold viewers’ attention and that can be adapted on both linear TV and its new streaming platform. These new formats touch on how NBCU connects brands to talent and the right content, help brands tell a thematic story, incorporate brands’ own aesthetic into the program leading into a commercial break, highlight advertisers’ charitable causes and brings brands together with Gen Z.