Opinions expressed by Entrepreneur contributors are their own.

This article was co-written with Arman Vali, founder, bestartup.com.

The Middle East has changed a lot in the past decades, with the UAE particularly being the region’s pinnacle in many fields like commerce and banking, tourism, construction, sustainability, and even space exploration. Thanks to decades of strategic investment, the UAE has changed the perception of what is possible for the region. However, there is a hidden missing piece for the future prosperity and quality of life for residents, which, unlike most technologies such as self-driving cars or COVID-19 vaccines, can’t be imported or adopted: advanced individualized precision medicine and diagnostics using multiomics and artificial intelligence. We believe now is the time to consider this a strategic priority for the UAE and other Middle Eastern countries to become leaders in this field.

The use of genomics, epigenomics, transcriptomics, and proteomics -collectively called multiomics- in medicine is on the rise. Unlike conventional genetic studies and population genetics that are excellent research tools but static, multiomics studies can be widely used in advanced diagnosis and precision medicine thanks to their dynamic and multi-dimensional nature. One’s genetic code is static and fixed throughout a lifetime; however, epigenomic, transcriptomic, and protein markers change as one ages or undergoes different diseases, or is exposed to environmental factors. That is why their use has increased several folds in the past decade, and it is expected to grow even more in the next one. Indeed, their use in diagnostics alone is expected to grow four folds in the next ten years and reach US$26 billion by 2030. These technologies are growing exponentially for being the cornerstone of many fields such as diagnostics, drug discovery and development, precision medicine, and medical research.

With this prospect, more and more nation states and companies are pouring billions of dollars into research and development. The UK’s Queen Elizabeth II launched the largest biotech hub a few years ago, and private investment in genomics alone hit $4.5 billion in 2020. Those investments led to an explosion of biotechnology startups, mostly in the United States and Europe, and paved the way for several ground-breaking products, such as the first-ever multi-cancer diagnostic test that allowed President Biden to launch his moonshot project to end cancer in the United States as we know it. However, unlike most other technologies, one cannot simply purchase and use them as is, elsewhere. 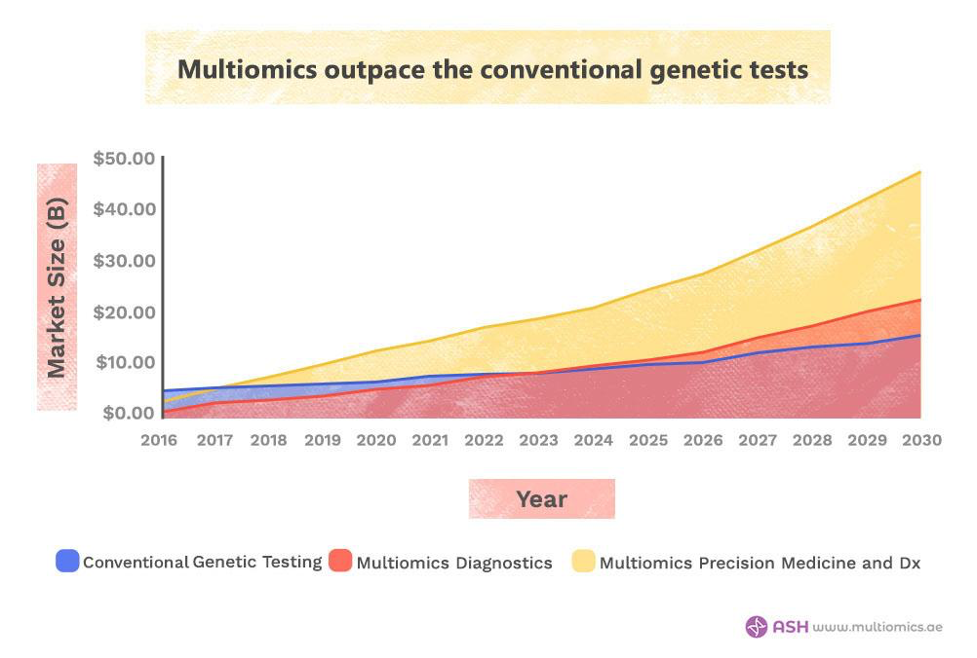 Multiomics and the Middle East

By their very nature, technologies based on multiomics interrogate the subtle differences in the genetic material to, for example, diagnose cancer, or find the best personalized medicine for an individual. Since people’s genetics are unique, a diagnosis or treatment that is developed for a population might not directly be applicable to another.

A vast majority of research and product developments use participants with white European descent, since most of such activities are carried out in the US, UK, and Europe. A recent study in Nature Medicine concluded that 84% of all participants in such studies are white people with European descent. Unfortunately, a minuscule portion of the samples are Arabs or people with Middle Eastern descent- the figure is one for every 878 Europeans. Furthermore, the statistics are as low as one Arab or person with Middle Eastern descent for every 35000 Europeans, if one only considers research by companies developing diagnoses and treatments.

The negligence of Arab and Middle Eastern genetics can put Middle Eastern countries at a severe disadvantage. Even if an imported product performs worse by just 1% on our population, the consequences are extreme. For a hypothetical (yet realistic) case of a disease that affects 1 in 200 of the population (cancer affects around one in 150), and a diagnostic test that is 99.5% specific (the best cancer detection research product), a positive test means the person has a 35% chance of actually having the disease. Dropping the performance to 98.5% means the person has only a 15% chance of actually having the disease. This seemingly small drop in performance for an imported product can increase the screening cost by three times.

And these ominous numbers are not the worst-case scenario. A previous study showed that eurocentric studies result in polygenic risk scores between 2-4.5 times more accurate for European people than for other genetic descents. As shocking as these numbers are, they are barely surprising. Most research takes place on local participants. For biotechnology companies, having a product and bringing it to the market have a much higher priority than making it universally applicable. There’s no question that there should be efforts to make global research applicable to everyone- however, we believe that Middle Eastern countries must take the matter into their own hands.

One may assume most countries in the Middle East are aware of the revolution, and there must be significant investments in this field. Unfortunately, that does not seem to be the case as is evident from the estimated number of related startups in the region, compared to the rest of the world. Similar to other technological advancements, such as the internet or the COVID-19 vaccine, an overwhelming majority of such investments, innovations and startups are in the US, UK, and Europe. The lack of major startups simply shows that being a leader in this field is not a priority for Middle Eastern countries. As argued above, missing out on such a revolution will not just be a missed financial opportunity; there will be more significant consequences.

It is, however, not too late. The use of multiomics in diagnosis and precision medicine is still a young field. Middle Eastern countries will not be far behind the US, even if they start today with the right strategic investment, infrastructure creation, facilitating and simplifying regulation, and extensive training programs. It is encouraging that the UAE started a nationwide program to create a population genetics biobank for all UAE residents several years ago. However, these efforts will only come to fruition if they lead to innovative companies and products, attracting talents and experts to build startups, and ultimately making the future our children deserve. 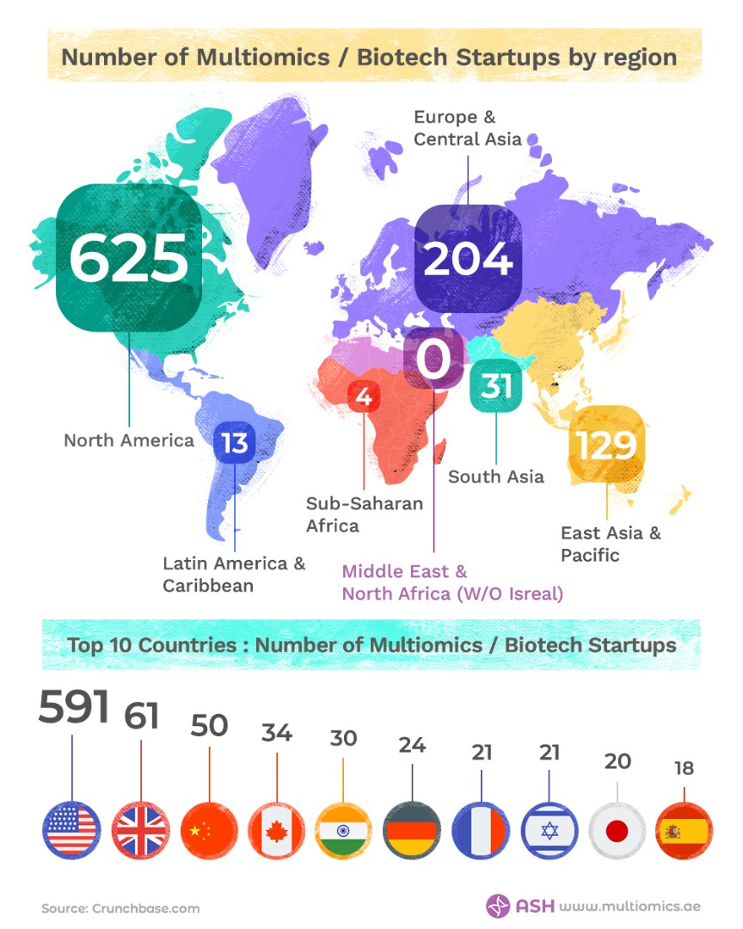 The Middle East is one of the frontrunners in facilitating regulation, providing tax incentives, and other motivators to make it easier to start a business. These classic strategic policies are essential, but they might not be enough this time. The barriers to entry for multiomics startups aren’t just friendly regulations, business set-up, or friendly financial services and policies. The initial investment need is much higher than most seed investments budgets, and more importantly, the talent and expertise in this field are scarce.

In order to have homegrown startups building products tailored for our own population, our mindset toward multiomics startups must shift, and we should see them differently at every stage. In order for the investment and talent to sustain an ecosystem, apart from classical incentives, the strategic funding should be targeted toward building reusable startup ecosystems to ensure materializing the return on investment early on in the process.

Finally, are we missing more than just a business opportunity? Sadly, the answer is yes. Not only will we miss a multi-billion-dollar regional and much larger global business opportunity, but also we may jeopardize our children’s future ability to access diagnostics and health treatments with the same accuracy and quality as others regardless of where they live.

This is a kind of problem that needs to be addressed with domestic resources. We have made tremendous progress over the past decades, turning Middle Eastern countries like the UAE into the epicenter of fields such as commerce, innovation, logistics, and tourism. We have built the largest and the best, and we can do it again.

Related: The Emirati Genome Program: A Gamechanger For Healthcare In The UAE

Regulation should not get in the way of doing business