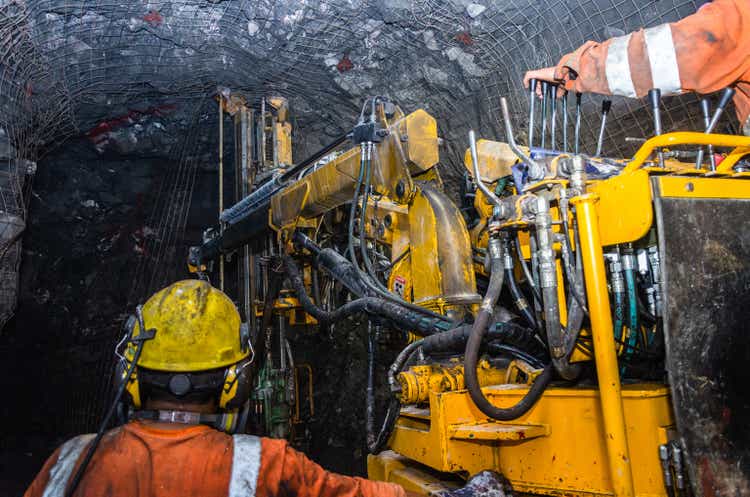 It was a mixed Q1 Earnings Season for the Gold Miners Index (GDX), with elevated absenteeism impacting production levels and costs. However, true to form, Torex’s (OTCPK:TORXF) operational excellence has continued, tracking at ~24.7% of its annual guidance mid-point despite Q1 being the low point for production. Unfortunately, this operational performance was overshadowed by higher capex estimates than anticipated at Media Luna and challenging rock conditions in the South Portal Lower. At a sub $750 million market cap, Torex remains undervalued. Still, with several other high-quality producers on the sale rack, I continue to see better opportunities elsewhere for the time being.

Torex Gold released its Q1 results last month, reporting quarterly production of ~112,400 ounces at all-in sustaining costs [AISC] of $1,034/oz. This was a solid performance considering the sub-par operational results from many producers, given the continued labor tightness exacerbated by COVID-19-related exclusions. Based on this solid performance, the company is on track to deliver into its FY2022 cost guidance ($980/oz to $1,030/oz) and is on track to beat its production guidance mid-point for the year. Let’s take a closer look below:

As shown in the chart below, Torex saw a 13% decline in production year-over-year, which may disappoint investors reading solely the headlines. This was related to lower head grades and slightly low recovery rates on a year-over-year basis, with underground grades coming in below 6.0 grams per tonne gold, down from difficult year-over-year comps of ~7.5 grams per tonne gold in Q1 2021. However, it’s important to note that production is expected to increase throughout the year as grades improve, and while production was lower vs. Q1 2021, this was in line with plans.

Assuming an average quarterly production rate of 116,000 ounces for the remainder of the year, Torex will beat its production guidance mid-point of 455,00 ounces (~460,000 ounces vs. 455,000 ounces) and be in a decent position to meet its cost guidance. This is consistent with the company’s performance over the past few years, which deserves an “A” grade considering the headwinds. In fact, Torex’s CEO, Jody Kuzenko has not only managed to deliver on targets from a production and cost standpoint with remarkable consistency but also maintained some of the best safety records industry-wide, with the company being 1-year LTI free in April.

Looking at margins above, they also slid in the period but came in at ~45% due to some help from a higher average realized gold price ($1,876/oz). Similar to costs, margins were well above the industry average and should improve as the year progresses due to higher grades, partially offset by slightly higher cyanide consumption per tonne milled relative to a favorable Q1 (2.73 kilograms per tonne milled). Assuming Torex reports all-in sustaining costs of $1,005/oz in Q2, we will see another quarter of slight margin compression, with AISC margins likely to come in near $870/oz vs. $919/oz in Q2 2022. This is because while the gold price started strong in Q2, its performance has fizzled as the quarter has progressed.

Moving over to Torex’s financial results, revenue came in 10% lower year-over-year at $207.7 million, with the fewer ounces sold offset by a higher average realized gold price ($1,876/oz vs. $1,778/oz). If we look ahead to Q2, we should see a return to increased revenue on a year-over-year basis, with similar ounces sold but easy year-over-year comps due to the softness in the gold price in Q2 2021. Having said that, free cash flow is likely to remain negative in the quarter and for the remainder of the year, barring a significant r
ise in the gold price.

The weaker free cash flow profile in Q1 can be attributed to royalty and profit-sharing payments, which led to a cash outflow of $19.1 million in Q1 (Q1 2021: cash inflow of $9.3 million) when combined with fewer ounces sold. On a full-year basis, Torex is ramping up spending on Media Luna development, with plans to transition production from El Limon-Guajes to Media Luna in 2024. While this transition to a negative free cash flow yield may be disappointing, it’s important to note that Torex will return to being a cash flow machine in 2025 once Media Luna is in commercial production. This is based on projected 2025 production of ~405,000 gold-equivalent ounces at AISC below $1,025/oz.

It’s worth noting that while production will be slightly below 2022 levels after mining transitions to Media Luna (post-2024), there is the opportunity to fill the mill long-term with ore from ELG Underground and the nearby EPO deposit. Assuming Torex can secure 2,000 tonnes per day of excess material, we could see a nice boost to annual production, translating to upwards of 70,000 incremental ounces depending on grades mined. So, while not confirmed yet, there is a path to production remaining above 400,000 GEOs per annum long-term (production will drop off sharply in 2027).

Finally, once Media Luna development is complete in 2025, Torex may also be able to look at an acquisition to diversify, enabling the company to shed its single-asset producer status, similar to what Orla Mining (ORLA) did last week. This would be a significant upgrade to the investment thesis, given that while Torex grades high on valuation and high on operational/safety performance, single-asset producers trade at much lower multiples, especially if their one operation is in a less favorable jurisdiction. Ideally, the company would enter a Tier-1 jurisdiction (Canada, United States) or a more favorable mining state in Mexico if it were to go this route.

Last but not least, Torex has seen improved development rates in the Guajes Tunnel, which has advanced by more than 1.9 kilometers. However, this was partially overshadowed by the admission that development rates haven’t been quite up to plans in the South Portal Lower. So far, advancement is sitting at just ~600 meters, with a year-to-date advance rate below 2.5 meters per day vs. a budgeted rate of 4.5+ meters per day. This is not a huge deal but will be a key metric to watch going forward.

On the procurement side and financing, the company is working towards securing long-lead items, and the hope is that there aren’t any issues given the supply chain headwinds globally. Meanwhile, from a financing standpoint, Torex is sitting on ~$240 million in cash and ~$390 million in liquidity (undrawn $150 million revolving debt facility) and is looking to raise between $250 million to $300 million in debt to ensure it has enough capital to fund Media Luna construction. If the gold price were to cooperate and head back above $2,000/oz, this would certainly help Torex to maintain a stronger balance sheet during the construction period.

Based on Torex’s 85 million shares outstanding and a share price of US$9.20, the stock currently trades at a market cap of ~$782 million. This is a very reasonable valuation for a 400,000 ounce per annum producer and is well below my estimated net asset value for Torex of ~$1.28 billion, translating to a P/NAV multiple just below 0.65. Having said that, Torex is a higher-risk bet than most other producers due to being a single-asset producer in a Tier-2 jurisdiction that’s in the process of transitioning from one mine to another. Therefore, I do believe some of this discount is justified.

Based on what I believe to be a more conservative multiple of 0.90x P/NAV, I see a fair value for the stock of US$13.55. While this points to a 47% upside from current levels, I prefer to bake in a minimum 35% margin of safety for single-asset producers to justify starting new positions. After applying a 35% discount to fair value, Torex’s updated low-risk buy zones come in at US$8.80, slightly below current levels. This doesn’t mean that the stock must head lower, but if I were looking to buy the stock, I would become most interested during any pullback below support at US$9.15 (shown below).

Torex Gold continues to be one of the best-managed producers from an operational standpoint, consistently meeting its targets and having a glowing safety record. Having said that, it is a single-asset producer in a less favorable jurisdiction at a time when there are a handful of producers to choose from that are also on the sale rack. Therefore, while I think this is a great story, I continue to see safer bets elsewhere in the sector. Having said that, if I were looking to start a position in the stock, I would view any pullbacks below US$8.85 as low-risk buying opportunities.