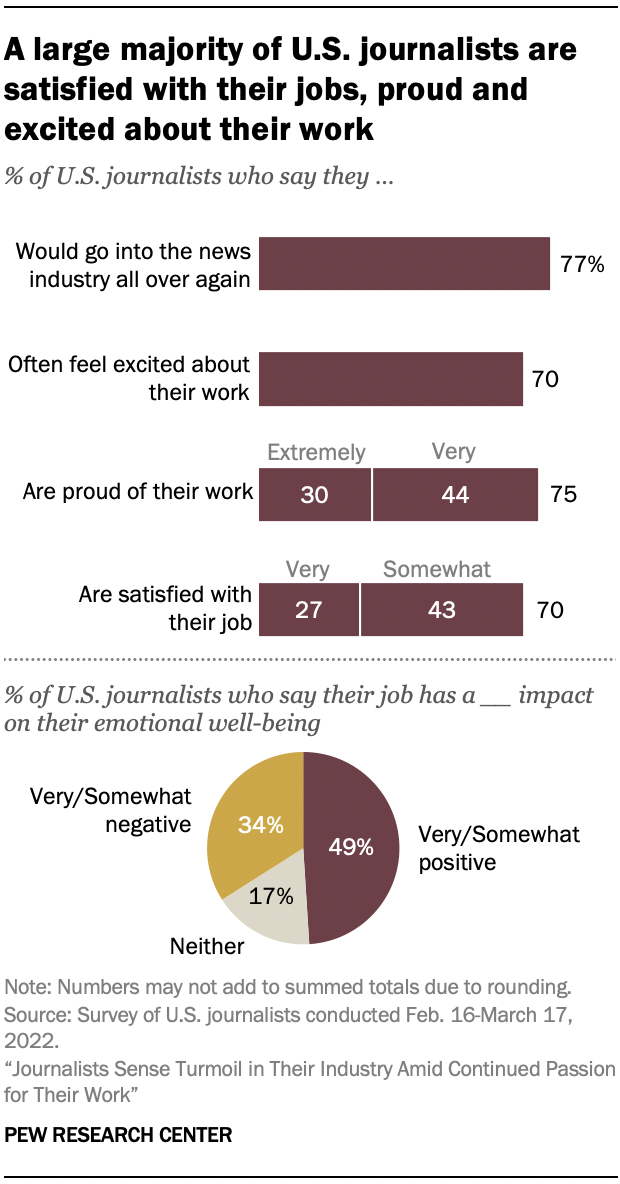 Despite years of cutbacks, layoffs and buyouts across many parts of the news industry – as well as disinformation campaigns and the stresses of the COVID-19 pandemic – U.S. journalists in 2022 express a great deal of personal satisfaction in their jobs.

Seven-in-ten journalists surveyed say they are very (27%) or somewhat (43%) satisfied with their job these days. That far outpaces the 22% who say they are very or somewhat dissatisfied; the remaining 8% are neither satisfied nor dissatisfied. Seven-in-ten journalists also say they often feel excited about their work, compared with 29% who say they often feel discouraged about it.

Along these same lines, three-quarters of journalists say they are extremely (30%) or very (44%) proud of the work they do. Roughly one-in-five (21%) are somewhat proud, while only 5% express little or no pride in their work. What’s more, nearly eight-in-ten (77%) say that if they could go back in time, they would pursue a career in the news industry all over again.

Despite mostly positive assessments of their jobs, journalists recognize the instability and turmoil in the news industry more broadly.

When asked to provide the one word they would use to describe the current state of their industry, journalists’ answers largely point to challenges. The concept offered far more often than any other is that of chaos and struggle: 42% mentioned words such as “chaotic,” “dying,” “declining” or “struggling.”

Overall, about seven-in-ten respondents (72%) offered negative words, including some who used words like “biased” or “partisan” (7%) and others who gave a word such as “stressful” or “difficult” (6%). Just 9% of responses carried a positive tone, including words such as “important.” Another 17% were neutral in nature, including terms like “changing,” “fast,” “busy” or “competitive.”

Journalists also were asked for one word they think the public would use to describe the news industry; the results, which include an even higher share of negative words, are in Chapter 4.

Journalists say the industry’s best function is getting the news out, but many say it fails at getting the story right

Journalists were asked in a pair of open-ended questions to write down what the news industry does the best job of these days, and what it does worst. Overall, the responses indicate that journalists think the profession is good at getting the news out and adapting to changes in the industry. But getting the story right and issues related to bias and partisanship rise to the top as areas journalists think the industry handles worst.

Nearly a quarter of journalists surveyed (23%) say that the one thing the news industry does best is getting the news out – higher than any other category. “Getting the news out” includes a range of responses, from covering news quickly and covering breaking news to the quantity and variety of content available.

Also near the top of the list of things journalists say their industry does best is adapting to changes – an answer provided by 18% of respondents. This includes adapting to technological changes in the workplace, shifting business models and a generally evolving media environment.

Two other areas were named by at least 10% of journalists as the industry’s greatest strength – getting the story right (e.g., truth and accuracy, handling misinformation, and investigative reporting, named by 14% of respondents) and coverage of specific topic areas (10%).

While “getting the story right” is named by 14% of journalists as the thing the industry does best, nearly a quarter (23%) identify it as the thing the profession does worst – rising to the top in that category.

Other negative responses illuminate journalists’ significant concerns about how the industry handles issues related to bias and partisanship, including objectivity in coverage and ensuring that diverse viewpoints are represented in stories. One-in-five journalists surveyed say that is what the industry is worst at. Meanwhile, 15% say the industry’s weakest point relates to internal workplace issues, such as salaries, labor practices and staffing issues.

There is no consensus on whether journalism in general is doing a good job at issues of diversity in the workplace and reporting, with 5% putting this in the “best” category and 3% citing it as something the industry does worst.

Mixed reports of salaries and newsroom growth in the past year

The survey asked a few questions aimed at getting a sense of the financial standing of journalists and the economics of the organizations they work for. On the one hand, the responses may seem surprisingly positive in the context of an industry that has been experiencing cutbacks for many years. On the other hand, for the majority of journalists and their companies, stagnation or contraction appears to be the norm. And many express at least some concern about their job security.

While we could not identify any benchmarks for these questions among journalists, previous Center research shows that newsroom employment overall has dropped in recent years, particularly among newspapers, though there have been considerable gains among digital-native outlets. This is in line with findings in Chapter 8 showing that journalists who say they work for outlets that originally started online are more likely than those who work for other types of outlets to say their outlets are expanding.

Additionally, the beginning of the COVID-19 pandemic proved to be very difficult for the revenues of many news organizations, especially newspaper companies – many of which received a Paycheck Protection Program loan from the U.S. government.

Most journalists are not in a union, but many say they would join

The past few years have seen a surge in newsroom staff seeking to unionize, and in many cases, succeeding. There have been more than 100 newsroom unionizations since 2015 and 37 in 2020 alone.

Among those without a union, most (56%) say they would join one if it were available.

About one-in-ten journalists have experienced harassment inside their organization, most often along political lines

Journalists largely agree that these past two years of altered life due to the COVID-19 pandemic will have a lasting impact. Six-in-ten journalists surveyed say the pandemic has brought a great deal or fair amount of permanent change to news reporting at their organization. Another 21% say it has brought some change.